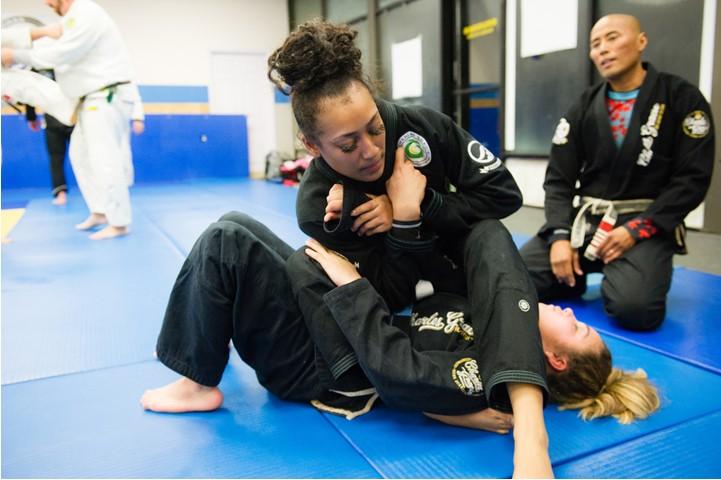 What Martial Arts is Best for Small Women’s Self Defense?

There is a reason why a variety of martial arts are commonly practiced today, even those that first originated hundreds or even thousands of years ago. It’s because each martial art offers its unique advantages, particularly when it comes to self-defense. So, what about women’s self-defense? We get asked this question a lot and think it’s crucial for women to be informed about the best martial arts to practice, particularly smaller women concerned about self-defense and unsure of where to start.

Some of the best martial arts include Krav Maga, Tae-Kwon Do, and Brazilian Jiu-Jitsu, and below, you’ll find out why they are practical options for smaller women’s self-defense.

Krav Maga was initially used as the official self-defense system by the Israeli military on and off the battlefield. Today, many women benefit both physically and mentally from the drills designed to address one’s strengths and disadvantages. In this way, the real-world application of Krav Maga helps teach women how to gain the upper-hand despite their size.

With its application in law enforcement and growing popularity in competitive fighting, Krav Maga may seem intimidating to some, especially beginners. Yet, there is no denying that it has a lot to offer any woman who is willing to learn how to deal with both armed and unarmed attacks. The drills are heavily repeated so that Krav Maga students can act quickly when under duress. One thing worth noting, however, is it is very physically demanding to learn what is usually a more specialized set of self-defense moves used to defend only against selective attacks. Often training will involve the use of fake weapons, and real-life scenarios can be very different from what you might train for.

This martial art also teaches women how to use various parts of their bodies, including their knees and elbows, as weapons when they need to, which gives them some tools to defend themselves in violent situations. That said, apart from striking techniques, Krav Maga does not incorporate a wide variety of martial arts that could end up being more effective given the various violent scenarios that could happen.

Krav Maga prioritizes conflict-avoidance and awareness of one’s surroundings, which is incredibly important for women to practice given they are at a higher risk for violent crimes like sexual assault. For this reason, Krav Maga is known as a simple and effective art for self-defense, making it a popular choice for women. Still, this martial art may require more time and dedication than you may be able to give if you are looking to walk away with more immediate skills.

Tae-Kwon Do stands out among the rest as one of the best martial arts for women because there is an emphasis on kicking. If you think about the fact that women are generally stronger in their lower bodies than their upper bodies, you can understand how important it is for women to have a self-defense practice that focuses more on these lower-body moves, where other martial arts do not. Not to mention that most men have more upper body strength than women, which they are likely to use against a woman in an attack.

Tae-Kwon Do originated in Korea and has been loosely translated as “the way of the hands and feet” or “the way of kicking and punching.” The emphasis on kicking is beneficial for women of all sizes because they will learn where and how to strike an assailant’s weaker areas, including their chin, solar plexus (which can impact their breathing), and groin. Tae-Kwon Do is not just about kicking and striking, however. Students will learn to defend themselves against attacks with blocking techniques as well.

In Tae-Kwon Do, there are not just one or two crippling kicks that women learn to combat strong male attackers, but a series of them. However, the main thing you do not gain from Tae-Kwon Do is the focus on hands and grappling techniques, which are still important despite a woman’s lower body advantage. This means that a fight against an attacker who is in close proximity, which would be the case with sexual assault, could be a tough one to win.

Overall, it is a great martial art to practice if you are a smaller woman or just starting with self-defense, but you may want to consider learning other martial art forms alongside Tae-Kwon Do. There are others that can help you feel more equipped to defend yourself through more upper body training as well.

The primary focus of Brazilian Jiu-Jitsu is self-defense, and it is easy to see why because it teaches a variety of strategies from chokeholds, armlocks, takedowns, throws, and attacks. Students practice ground, street-fighting stances, which enable them to come close to mimicking real-life situations without hurting one another.

This martial art became more popular thanks to competitors using it in UFC matches. Still, Brazilian Jiu-Jitsu recognizes that the same grappling techniques are also necessary for women to learn to control violent attacks no matter their size nor the size and strength of their opponent. With its focus on leverage, Brazilian Jiu-Jitsu teaches women to attack from higher positions, but this martial art’s main emphasis is on ground fighting. It is a great option for women and smaller students who want to learn how to defend themselves in the likely chance that they end up on the ground or pinned underneath their male assailant in a sexual assault.

Apart from the mat-based grappling, women also learn how to defend themselves if weapons are involved. Another critical aspect of this martial art is teaching students how to deal with attacks without actually attacking, whether it’s simple escape techniques or attacks to control the attacker. When necessary, Brazilian Jiu-Jitsu will also teach women how to disable attackers properly, take them down and conquer them, even if they are smaller and even if they are in close quarters.

The sad reality is that the world can be a dangerous place for women, but it is a woman’s responsibility to learn how to fend off an attacker in the event of a violent assault. Brazilian Jiu-Jitsu addresses self-defense from all angles, teaching a woman the awareness, patience, techniques, and self-control necessary to protect herself, regardless of her size.

What Martial Arts is Best for Small Women’s Self Defense?